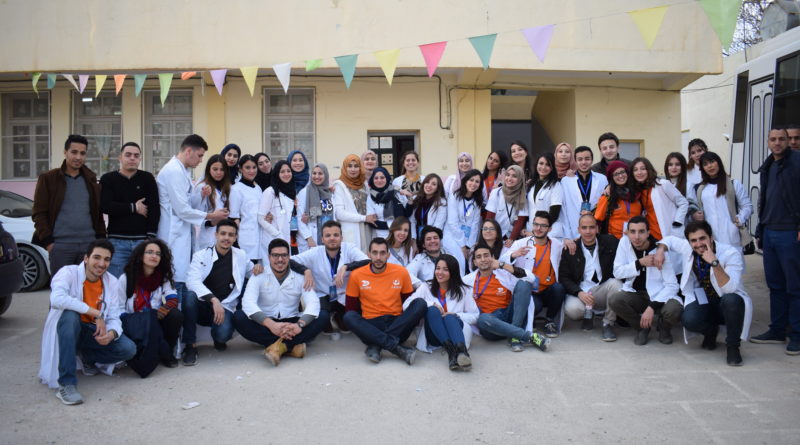 Universal health coverage is one of the hottest topics nowadays. It is above all a human right and an aspiration to reach. The Algerian government, since its independence in 1962, has provided immense resources to improve the public health sector, and indeed we are at 76% health coverage which is a prominent achievement for a developing country. Despite all of these valued efforts, 24% of the population still does not have access to healthcare services in Algeria even when it’s free of charge.

From there, we, medical students of Le Souk Algeria, decided to have a national project of medical caravans, under the slogan of « Your health matters for us and the distance does not hinder us ». This innovative activity did not only help vulnerable populations in rural areas and offer them granted medical care, screening tests and awareness workshops on common health issues, it has also played a role in diminishing medical social inequities in two main Algerian cities: Constantine and Batna through three editions.

The whole activity was set by members following a proper activity management process. First, they started by forming multiple organizing committees, each one was in charge of a specific task: checking the administrative process, visiting the villages and choosing the activity avenue (primary school, municipal library and a big tent set in place), contacting doctors, gathering medicines from some sponsors and drugstores donations, collecting clothes and food through the social media campaign, preparing for the different workshops (brochures, teddy bears, gifts, toys… etc) and setting up an efficient plan for the D-day.

Several medical staff personals from various specialties accepted the invitation, and so we formed a complementary holistic team present in one small hospital and comprised of: pediatricians, orthopedists, gynecologists, dermatologists, otolaryngologists, gastroenterologists, psychiatrist and family doctors, nurses and interns.

On that special day, all the members were present in the hospital, some in the different consulting rooms, others in the pharmacy, and the rest divided between the awareness corner, the teddy bear workshops, and the clothes and food « store ».

It was heartwarming to say the least! The now empowered medical students were applying what they learned but in a live real scenario, under the supervision of physicians and experts. It was a beautiful symbiotic scene to admire, a glimpse to the reassuring future of our healthcare handled by health advocates and reformers!

By the end of the three editions, we evaluated our activity and made sure our goals and objectives were fulfilled successfully. Even the feedback received from the tackled community was inspiring, satisfying and filled with gratitude and appreciation.

And this, ladies and gentlemen was our success story that we are so proud of, such a diverse engulfing event joining all of our committees, solely organized by students aged between 18 and 25 years old pursuing the one and only dream “health for all, everywhere”.